Will Mother always get the custody of child ? 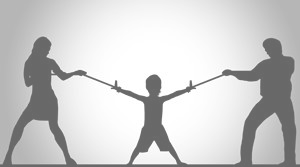 The bench of Justice Umesh A. Trivedi was dealing with the appeal filed under Section 47 of the Guardian and Wards Act, 1890 challenging the order passed by the Family Court whereby, the application preferred by the wife for custody of the minor son’ came to be refused.
Mr. Samir Afzal Khan, Counsel for the appellant submitted that considering the age of the child at the time of filing an application being 2 years in view of Section 6 of the Hindu Marriage Act, 1956 ordinarily custody of the child should be handed over to the wife as per the mandate of the statute.
Mr. Bhunesh Rupera, Counsel for the respondent submitted that the appellant deserted not only the husband but the child aged 2 years then, who has been brought up by the husband with the help of his family members. She has never returned to join the matrimonial life with the respondent-husband.
It was argued that since the wife deserted the child when he was at the age of 2 years, she cannot pray for custody of the same without any valid reasons as leaving the custody was a voluntary act by her.
The issue for consideration before the bench was:
Whether the custody of the child could be granted to the mother or not?
The bench observed that since the age of 2 years the child is raised by the husband up till now, he has more attachment with the father and the mother appears to have not cared for either having the custody or any attachment for the custody.
High Court opined that “there is no substance in the argument that the custody of the child was snatched away by the father and on the contrary, as admitted by her in the cross-examination that she left a child at her matrimonial home to visit her ailing father and since then, not returned back. Not only that, while refusing the custody of the child in this case as coming out from the affidavit in-reply filed by the husband and not disputed by the advocate for the appellant the wife has been permitted visitation right to the child.”
In view of the above, The bench rejected the appeal.